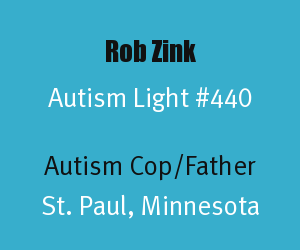 Rob Zink is 45 years old and has served as a Police Officer for 17 years in the St. Paul (Minnesota) Police Department. His dedication to use his role as a police officer to help the autism community has earned him the nickname "Autism Cop". Rob Zink is also an Autism Father. Two of his three sons have autism. Rob Zink is an Autism Light for how he is making a difference in the autism community in St. Paul, Minnesota by fostering effective relationships and appropriate police responses to interactions with individuals with autism.

Autism Father: Rob Zink's 10 year old and 12 year old sons both have autism. Rob Zink told a parent at a community forum in December 2015 that, "This is very personal to me. Now I'm getting teary-eyed, but I never want to see an instance like what happened on the MTC happen to my sons. I give it my heart and I give it my promises as best as we can. We're not perfect, we're all going to make mistakes (City Pages, Rob Zink, St. Paul's 'autism cop' pushes an unconventional approach to policing, Susan Du, December 15, 2015)."

The following is a video of news story on Rob Zink's role in St. Paul as the Autism Cop.


CARE Project is part of a groundbreaking effort to ensure that police calls involving people with autism end safely. His first priority has been getting to know St. Paul families with autistic children and explaining how police respond to domestic violence calls - a not uncommon scenario involving those with an autism spectrum disorder. His second is helping police find quieter and gentler ways to defuse those calls (StarTribune, A St. Paul Police Officer is Leading Efforts to Ensure that Encounters with Autistic People End Safely, July 24, 2015).

Cmdr. John Bandemer, who is the head of the Western District police command where Rob Zink serves said, "We have been seeing more calls relating to kids on the spectrum and Rob has kind of become our point person. We are grateful that Rob has an interest in this from his point of view as a father. That and his work with families can kind of close the circle for understanding (StarTribune, A St. Paul Police Officer is Leading Efforts to Ensure that Encounters with Autistic People End Safely, July 24, 2015)."

You can read stories of success within the CARE Project at the following online article: (StarTribune, A St. Paul Police Officer is Leading Efforts to Ensure that Encounters with Autistic People End Safely, July 24, 2015)

For more information on the CARE Project in the St. Paul Police Department email: SPPD-Autism@ci.stpaul.mn.us.

Special thanks to Rob Zink for being an Autism Light. We hope that programs like his CARE (Cops Autism Response Education) will be adopted in every corner of the world. Rob Zink's success in St. Paul is a shining light to help that happen.

If you enjoyed this article you may wish to read other posts at Autism Light with the Label of Police Officer.

Autism Light honors diverse heroes to the world of autism.
Posted by Alan Stokes at 3:54 PM