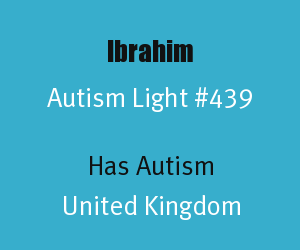 Ibrahim is a 7 year old boy who has autism and lives in the Harrow area of Greater London, England. He is a Muslim and a student at the National Autistic Society's Radlett Lodge School. Ibrahim is an Autism Light for the inspirational manner in which he prayed for diverse faiths during a lesson on Christmas traditions at his school in December of 2015.

Ibrahim started attending the Radlett Lodge School in 2012, and when he first arrived he could only say a few words. He has grown over the 3 years of his education at the school. The following is an account of his inspiring prayer during the lesson on Christingle at his school in December of 2015.


Ibrahim showed how far he'd come in a particularly touching and inspiring way during an RE lesson about Christingle in the first week of December. The students were taking it in turns to light a Christingle they'd made and blow it out. Ibrahim is Muslim and when it was his turn he put his hands together and prayed 'for all the Christians and Christingle and the Church, the Synagogue and Jewish, Islam and Muslims and all the families and children in the world and the Mosque and the Church and Christians and Christingle and Easter eggs (The National Autistic Society, Pupil finds his voice with wonderful Christmas message, December 21, 2015).'

Ibrahim's teacher Zoe O'Donovan said, "Ibrahim says he wants to be a 'teacher of a hundred children' when he grows up and I have no doubt he'll succeed in his goals. There's no limit to his potential  (The National Autistic Society, Pupil finds his voice with wonderful Christmas message, December 21, 2015)."

Special thanks to Ibrahim for being an Autism Light. Ibrahim's progress in communication is an example of how autism education can be life-changing for some students. His Christingle prayer reflects the innocence of a child who in his heart holds a love for others, regardless of their diverse religious views. Ibrahim's acceptance of others, whose religion is different than his own, is an inspiring example to others in this day and age.

Autism Light honors diverse heroes to the world of autism.
Posted by Alan Stokes at 10:59 PM