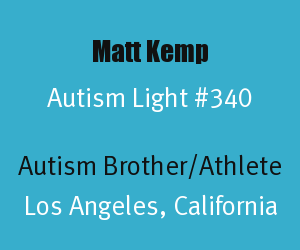 Matt Kemp is a professional baseball player for the Los Angeles Dodgers organization. Matt Kemp's younger brother Carlton has autism. Matt Kemp is an Autism Light for being a dedicated autism brother and for his efforts over the years of fundraising for Talk About Curing Autism.


Ante Up for Autism:  Under the celebrity leadership of Matt Kemp, the 8th Annual Ante up for Autism event was held November 8, 2014. Here is a video featuring Matt Kemp at raising funds for autism at his charity poker event called Ante Up for Autism. More information on this autism fundraiser is available at www.anteupforautism.org.

When my brother, Carlton, became one of more than 1.5 million people affected by autism, it was a confusing blow to me. I have always wanted a little brother that I could play ball with, but Carlton's impaired ability to socially interact and communicate made it impossible for that to happen. TACA has given me hope that playing ball with him in the near future is a possibility (Kemp, Stewart co-host autism benefit, Taylor Price, MLB.com, 3/15/2009).

Baseball Career:  Matt Kemp was born on September 23, 1984. He is an Outfielder for the Los Angeles Dodgers. His entire career statistics in real time are on the Matt Kemp Page on ESPN. Matt Kemp has been on the all star teams in 2011-2012 and won the Gold Glove Award in 2009 and 2011. In 2011, Kemp became the first player to finish in the top two in both home runs and steals since Hank Aaron accomplished this in 1963.

Fans:  Matt Kemp gave his shirt and shoes to a disabled fan who had cancer in the 2013 season.

Wikipedia: You can also find out more about Matt Kemp on the Matt Kemp Wikipedia Page.

Special thanks to Matt Kemp for his efforts to make a difference for autism. His personality as an athlete, autism brother, and autism advocate in the San Diego community is an inspiration to many. The autism community is blessed to have Matt Kemp batting for our team.

Photo: The photo of Matt Kemp in this post is from Creative Commons of Wikipedia.
Posted by Alan Stokes at 1:54 PM