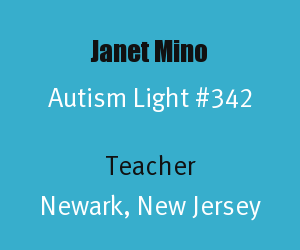 Janet Mino is a teacher from Newark, New Jersey. Janet Mino is an Autism Light because she has been teaching children on the autism spectrum for 20 years and her work was the subject of the 2013 documentary called Best Kept Secret.


I don't get it when people say I have a hard job. I get so much joy. To me, they just think different. I want people to have an awareness that there are children in the inner city with autism that need different services, and need help. Everybody's different. America is made up of different people. They are part of this world like we are (Janet Mino as Quoted in The Montclair Times, Gwen Orel, 5/4/2013).

Best Kept Secret (2013): The film Best Kept Secret was directed by Samantha Buck and chronicles Janet Mino's efforts as a dedicated teacher to prepare six of her inner city students in their last year of school for life after graduation.

The following is the trailer to the film Best Kept Secret.

Best Kept Secret is now available on DVD and can be purchased from Amazon.

You can follow news about Best Kept Secret on the following social media:
Here is another preview on YouTube about the film Best Kept Secret.
Special thanks to Janet Mino for her dedicated work as a teacher of autism students in Newark, New Jersey. In a world that can be cold to people with autism, Janet Mino lights a fire under herself as a teacher so that she may be Autism Light.

Autism Light honors diverse heroes to the world of autism.
Posted by Alan Stokes at 8:48 PM