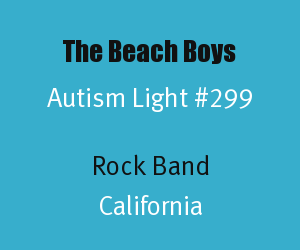 The Beach Boys are a Rock band that formed in 1961, in Hawthorne, California. They became a sensation for hit songs such as Good Vibrations, Wouldn't It Be Nice, God Only Knows, and Surfin' USA (Source). The original members of the band were Brian Wilson, Dennis Wilson, Carl Wilson, Mike Love, and Al Jardine. David Marks and Bruce Johnston are also current members of the group and Dennis and Carl Wilson are deceased. The group has been entertaining fans for half a century, but quite possibly their biggest fan is a young man who has autism. The Beach Boys are an Autism Light for the way their music has helped a 22 year old boy with autism named Brett Werner over the years.

Brett Werner's admiration of The Beach Boys has also been an inspiration to famous band. Beach Boy, Mike Love, said, "I guess it's the ultimate compliment for us--that our music is a tribute (Source)." A CBS Sunday Morning news story on The Beach Boys celebrating their 50th Anniversary in 2011 is available at this link.

For more information on The Beach Boys visit their Wikipedia Page.

The photo of The Beach Boys with this post is in the Creative Commons of Wikipedia. It was taken by Louise Palanker.
Posted by Alan Stokes at 9:37 PM