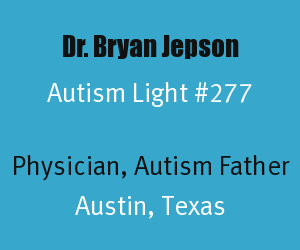 Dr. Bryan L. Jepson, M.D. is a physician, researcher, author, and internationally known speaker. Dr Bryan Jepson resides in the Austin, Texas area. Trained as a board certified Emergency Physician, the passion and focus of his career turned significantly toward understanding the biomedical treatments for autism after his second son Aaron was diagnosed with autism in 2001. Dr. Bryan Jepson is an Autism Light for being an autism father and for the way in which his work over the years has helped those dealing with autism.

Family:  Dr. Bryan Jepson is married to Laurie Jepson. The couple has four children. Their second child Aaron has autism. In 2008 they adopted an older 7 year old boy named Austin from the foster care system who has autism (Source).

Education: Dr. Bryan Jepson graduated from the University of Utah Medical School in 1995. He completed his emergency medicine residency in Grand Rapids, Michigan in 1998.

Experience: Dr. Bryan Jepson has experience as an emergency physician and medical director and has been integral in helping start clinics in Utah and Texas.
The following is a video of Dr. Bryan Jepson briefly sharing his background.

Changing the Course of Autism: Dr. Bryan Jepson authored the book Changing the Course of Autism: A Scientific Approach for Parents and Professionals, which was published in 2007. Medical Veritas 4 (2007) reviewed the book and said, "The book reviews the history of autism through its evolution from a purely psychiatric disease model to the current cutting edge biomedical understandings and treatment approaches. Emerging science is cited as to the epigenetic phenomena causing this increasingly prevalent disorder. The text acts as a roadmap for healthcare professionals and parents attempting to understand the intertwined gastrointenstinal, immunological, and neurological issues that are shrouded by an underlying corruption of detoxification systems in these children (Source)." The forward to the book was written by Katie Wright, daughter of the founders of Autism Speaks.

Here is a video of Dr. Jepson discussing his book Changing the Course of Autism.


Autism Organizations: Dr. Bryan Jepson is a member of the Treatment Advisory Board at Autism Speaks. He has also served as a "clinical advisor to Autism Research Institute and co-coordinator of their clinician training seminars (Source)."

Hobbies: Exercise is one of Dr. Bryan Jepson's hobbies. "He has completed in amateur bike races, running races and triathlons for the last 10 years (Source)."

Special thanks to Dr. Bryan Jepson for the difference he has made in the lives of thousands of families with autism through his work with research into biomedical treatment options. This post will also be linked to the Autism Light Medical Page.

Autism Light honors diverse heroes to the world of autism.
Posted by Alan Stokes at 6:29 PM