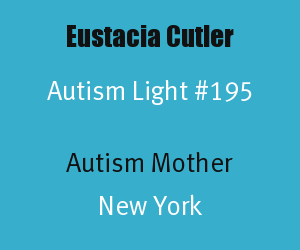 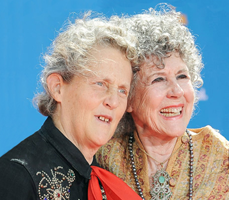 On this Mother’s Day we want to pay special tribute to one mother in particular:  Eustacia Cutler, the mother of Temple Grandin, known world wide for her ground breaking work in animal husbandry. Eustacia raised Temple in the 50’s when autistic children were diagnosed as “infant schizophrenics” and frequently were banished to institutions. Since raising Temple, Eustacia has devoted much of her life to helping all family members find the support they need to face the unique challenges of autism.

In 2010, British actress, Julia Ormond won an Emmy Award for her portrayal of Eustacia in the HBO docudrama Temple Grandin, and shortly afterward, at an autism conference in Los Angeles, she presented Eustacia with her Emmy. The following video captures the moment when Eustacia accepted Julia’s Emmy, saying it was a tribute for all mothers.

And here on this special Sunday Eustacia delivers her own tribute:

“Today is Mother’s Day. And today I salute all the long ago mothers who helped me raise Temple. In those days we had what we called the “Leave-it-to-Beaver Mom’s Union.”  Every child in the neighborhood knew that if he or she was doing something unacceptable one of the Mom’s Union was liable to open her window and yell, “I’m going to tell your mother.” When Temple heard that warning she knew she’d better shape up quick before the word reached home. Today this is called harassment and it’s not officially allowed, but my hope is that there’s still an unofficial Mom’s Union alive in every neighborhood. And to those Moms—as you lean out your window and scold, drive down roads chasing misbehavior—meet with other Moms to share the dark moments and the triumphs—I toast YOU!

A strong family is the linchpin—all through life. Some families have that strength, along with neighborhood support and maybe a little extra money. But what of those who don’t? Who live trapped in a neighborhood where there never will be a Mom’s Union? Exhausted parents adrift and broke, some of them hiding the dark stain of domestic abuse born of frustration and furious despair?

To honor the family linchpin Temple and I have set up The Temple Grandin/Eustacia Cutler Autism Fund dedicated to supporting and guiding all members of the family and the neighborhood organizations helping them.

The Temple Grandin/Eustacia Cutler Autim Fund will raise funds to:
For more information go to our website. If you’d like to donate to our cause send it to:

In the meantime to all you Leave-it-to-Beaver Moms, thank you for helping me raise Temple and HAPPY MOTHER'S DAY."

Our thanks to Eustacia Cutler for being an Autism Light, and for creating a special Mother's Day tribute for all autism mothers.

Autism Light honors diverse heroes to the world of autism.
For Related Information on the Autism Light Blog:  For more information on Eustacia Cutler's daughter, Dr. Temple Grandin read her post on this blog when she was named Autism Light #38. Also, if you liked this article you can search the label "Mother" and browse in chronological order all the stories of the mothers of children with autism who have been featured on Autism Light since the blog started.

Photos: The photo in this post was used with permission of Eustacia Cutler.