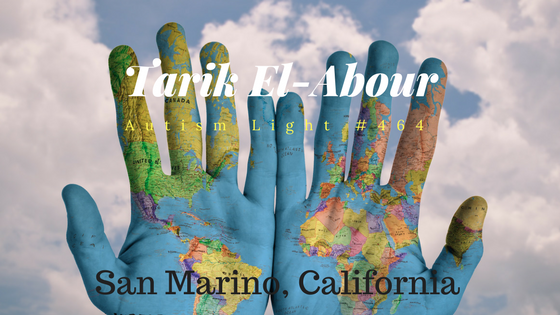 Tarik El-Abour is a 25 year old with autism from San Marino, California. After playing college baseball and two seasons of baseball for the Empire Pro Baseball League, Tarik El-Abour received a minor league contract from the Kansas City Royals in April 2018, making him by all accounts the first player with autism ever to be signed by a major league baseball organization. Tarik El-Abour is an Autism Light because of how his groundbreaking achievement in baseball will encourage others with autism to follow their athletic dreams no matter how high they may be.

After Tarik was diagnosed with autism at age 3, his mother Nadia Khalil quit her corporate job and went to UCLA to get an education in Special Education in order to help her son. She is now a popular author, speaker and teacher of self development. Nadia Khalil says this about her son.


"Those of us without autism think in concepts, he thinks in numbers. The greater the number of times he did anything, the better he was at it. Just like us. However, the way the numbers worked in his mind went way further than anything I could have yet imagined. He knew he had to practice. He knew he loved it. He told me that when he grew up and played baseball, he would buy me a house wherever he plays, so that I could watch his games live. He did not know yet how different he was. He did not know yet how autism was going to speak for him before he could speak for himself (Nadia Khalil, Quoted by Mitch Lehman, San Marino Tribune, August 9, 2017).”

The following is a news story on the Kansas City Royals signing Tarik El-Abour.


Tarik El-Abour was introduced to baseball when his father, Abed El-Abour registered him to play baseball in the San Marino National Little League. His road from there has been a steady pace to new opportunities.

College Career: Tarik El-Abour played baseball in college at Pasadena City College, Condordia University, Pacifica College and Bristol University. He received his Bachelors Degree in Business Administration from Bristol University but was not drafted out of college.

Reggie Sanders, a special adviser for the Kansas City Royals and an autism advocate, was instrumental in helping connect Tarik El-Abour and the Royals. Here is a video of the news conference where the Royals announced signing Tarik El-Abour.


"Tarik doesn't realize what he's doing. But the beautiful thing is that it's so raw for him because he's focusing just on baseball. But he doesn't realize he's really helping the community, which is amazing (Reggie Sanders, Quoted by Maria Torres, The Kansas City Star, April 14, 2018)."

Special thanks to Tarik El-Abour for being an Autism Light. We wish him the best of luck in his professional baseball career with the Kansas City Royals minor league system. May his achievement be an inspiration to others with autism who aspire to be professional athletes.

Autism Light honors diverse heroes to the world of autism.
Posted by Alan Stokes at 4:08 PM