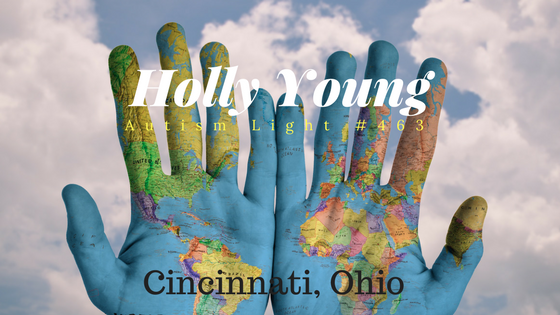 Holly Young is an autism mother, retired police officer, and business owner from Cincinnati, Ohio. Her 8 year old son Roman has autism. She retired after 16 years as a police officer to open a business called Puzzle Pieces in order to provide a place where parents of children with autism and special needs could find appropriate toys. Holly Young is also known for filing a federal lawsuit in 2012 against the failure of Ohio to provide ABA therapy for her son. Holly Young is an Autism Light because of the way in which she has helped provide resources and set the stage for legal precedent that will make a tremendous difference for autism families in Ohio and around the country.

Puzzle Pieces: Puzzle Pieces is a store opened by Holly Young so that parents and their children with autism would have a place they could go to see and touch toys geared for their special needs. Puzzle Pieces had their grand opening on March 24, 2018. The store is located at the address 11912 Montgomery Road, Cincinnati, Ohio.

The following is a news story on the opening of Puzzle Pieces.

Holly Young experienced frustration when she couldn't find a place to acquire therapy toys geared for autism, so she went into retirement from being a police officer in order to open Puzzle Pieces. Puzzle Pieces is not merely a business but a resource for the autism community in Ohio born from the passion of an autism mother that discovered a need for it.

Groundbreaking Lawsuit in Ohio for ABA Therapy: Holly Young had to fight the State of Ohio over the lack of ABA Therapy for her son Roman. Roman began receiving services in 2011 through the Help Me Grow program in Ohio when he was age 2. When the state refused to provide ABA therapy and services ended in August 2012, she and her husband David filed a lawsuit in December of that year. In January 2013 Judge Michael Barrett ruled in their favor of the Young's forcing Ohio to provide ABA services (WBRC News, January 15, 2013). In 2014 they received a settlement of $142,000 for the time that Roman went without treatment and how that impacted his development (WLWTV.com, September 30, 2014). This case was inspirational and helpful in opening doors for countless other autism families by setting legal precedent regarding ABA therapy.

"Roman has paved the way for a lot of autistic children that are having the same problems we had. The United States Department of Education actually stepped in and said Ohio was not doing what they should be doing for children zero to three, Holly Young said (As quoted by Adrianne Kelly, WLWTV.com, September 30, 2014).

Special thanks to Holly Young for being an Autism Light. She is an inspiration for her dedication as an autism mother, and her willingness to take action in the public arena that is making a practical difference for other autism families in Ohio. The climate for autism is improved for many by the faithfulness of mothers like Holly Young who see a need and do what they can to meet that need, even though it involves sacrifice. We wish Holly Young and her store Puzzle Pieces much success.

Autism Light honors diverse heroes to the world of autism.
Posted by Alan Stokes at 2:07 PM