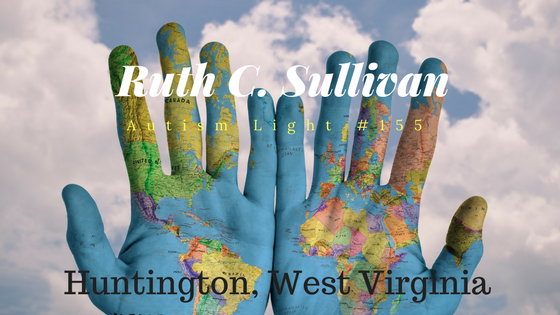 Dr. Ruth C. Sullivan is an autism mother from Huntington, West Virginia. She and her husband William had 7 children, including a son Joseph who has autism. Ruth and her son Joseph have remained in Huntington to this day because of the important services that are in place for him that don't cross state lines. Born in 1924, Ruth is an autism pioneer who has spent over half of her long lifetime as an advocate and community organizer for autism needs. She was one of the founders of the Autism Society of America and served as its first President in 1965. Ruth C. Sullivan is an Autism Light because of her devotion as an autism mother and her dedication to help other families with autism.

Education: Ruth Sullivan earned her doctorate in psychology from Ohio University in 1984 in psychology, speech, and hearing science and special education. She also has degrees in public health nursing and public health administration.

The following is a video where Ruth Sullivan shares her experiences with receiving her son's autism diagnosis and her dreams for autism services and research.

Ruth Sullivan made key contributions to this 2009 video by the Autism Society of America called The Future of Autism.

Rain Man Movie: Ruth Sullivan served as an autism consultant to the 1988 movie Rain Man, starring Dustin Hoffman. Her son Joseph was one of the individuals with autism that Dustin Hoffman studied in order to improve his role in the movie.

Individuals with Disabilities Education Act (IDEA):  Ruth Sullivan was one of the lobbyists for Public Law No. 94-142, which became a United States law in 1975 and since 1990 has been called the Individuals with Disabilities Education Act or IDEA. It became the landmark law that guaranteed handicapped children with autism and other disabilities had the right to receive a Free and Appropriate Public Education (FAPE). The ramifications of this law continue to this day to be felt in important rights that parents and their children have when working with diverse public school systems around the country.

Temple Grandin: Ruth Sullivan was the first person to invite Temple Grandin (Autism Light #38) to speak in public about her autism. She also wrote the forward to Temple Grandin's book The Way I See It: A Personal Look at Autism and Asperger's (2008)

Special thanks to Dr. Ruth Sullivan for being an Autism Light. Her faithfulness as a mother and advocate has sent rays of hope for autism across the United States. May the example that Ruth Sullivan has provided inspire other mothers to carry forth the light to meet a new generation of autism needs.

Autism Light honors diverse heroes to the world of autism.
Special Note: Ruth Sullivan is the new Autism Light #155 replacing the numbered spot on the blog left vacant after the removal of Dr. Hans Asperger.
Posted by Alan Stokes at 7:42 PM