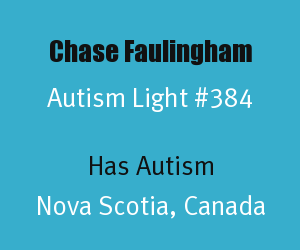 On Thursday, March 19, 2015, Chase Faulingham was outside walking with his grandfather Thomas Murray. Chase heard a soft cry for Help coming from behind a snowbank. His alertness to the cry for help led to the rescue of the man who had fallen behind a snowbank and was injured (CTV News, March 22, 2015).

Last year Chase could barely speak, but he has had tremendous progress this last year that brought him to the capacity to listen to unusual sounds outside such as a cry for Help. Here is a video of a news story on Chase Faulingham being a hero for this unidentified injured person.

Special thanks to Chase Faulingham for being an Autism Light. His heroic listening skills that helped rescue a man in distress is an example of the valuable things individuals with autism can do. We wish Chase all the best as he continues to grow and make a difference in the world.

Autism Light honors diverse heroes to the world of autism.
Posted by Alan Stokes at 9:02 AM

Email ThisBlogThis!Share to TwitterShare to FacebookShare to Pinterest
Labels: Autism, Canada, Has Autism