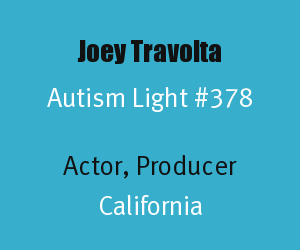 Joey Travolta is a 64 year old actor, singer, producer, director and screenwriter from California. He was born on October 14, 1950, in Englewood, New Jersey.  Joey Travolta is the founder of Inclusion Films and he has conducted camps for 15 years to give children with autism opportunities to create films. Joey Travolta is an Autism Light for spreading autism awareness and providing camps where people with autism can cultivate their talents in the film industry.

Inclusion Films: Joey Travolta is the Founder and Creative Director for Inclusion Films. Inclusion Films currently has locations in Burbank, Bakersfield, Livermore, and Sacramento, California as their workshops "seek to promote the creative skills and strong work ethic of film makers with developmental disabilities, ultimately allowing them to become more independent, self confident, and well-rounded individuals (Inclusion Films Website)." The following is a video of Joey Travolta explaining the employment opportunities that have come from alumni of Inclusion Films short film camps.


Family: Joey Travolta is married to Wendy Shawn and they have a daughter named Rachel. Joey Travolta is also an autism uncle. His younger brother John Travolta had a son named Jett who according to his mother Kelly Preston had autism (Huffington Post, November 20, 2012). Jett Travolta passed away in 2009 and the public revelation of his autism was announced posthumously.

Actor/Producer: To read about the dozens of film credits that Joey Travolta has been involved in over the years visit the Joey Travolta IMDb page.

Autism Light honors diverse heroes to the world of autism.
Posted by Alan Stokes at 11:21 AM