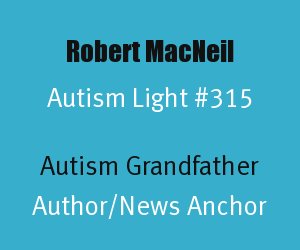 Robert MacNeil is 82 years old and is an Autism Grandfather. Robert MacNeil, also known as Robin MacNeil, is an author and a news journalist who along with Jim Lehr anchored the MacNeil-Lehr Newshour on PBS for 20 years. MacNeil was born in Canada and became an American citizen in 1997. He has homes in both Nova Scotia and Manhattan, New York. Robert MacNeil is an Autism Light for raising awareness of autism by using his news reporting skills to tell the story of autism, including that of his Grandson Nick.

News Anchor: From 1975-1995, Robert MacNeil and Jim Lehr hosted the MacNeil-Lehr Newshour on PBS. The daily news program that focused on a single feature was popular and groundbreaking. On October 20, 1995, Jim Lehr gave a Tribute to Robert MacNeil as MacNeil ended his time with the program.  After a hiatus of over a decade, Robert MacNeil returned briefly to the Newshour in 2011 to do a 6 part Autism Now series that has a personal connection to his family. Here is the news segment that Robert MacNeil did on his then 6 year old Grandson Nick's life, as part of the series on Autism Now.

MacNeil is the author of several books. "The People Machine," (1968) studied the relationship between television and politics. He has written three memoirs, "The Right Place at the Right Time" (1982), "Wordstruck" (1989) and "Looking For My Country, Finding Myself in America" (2003). He wrote three best-selling novels, "Burden of Desire" (1992), "The Voyage" (1995) and "Breaking News" (1998). He was co-author of "The Story of English," companion volume to the BBC-PBS television series which he hosted, and its sequel, "Do You Speak American?" (2005), a three-hour PBS series on American English today (PBS News Hour-Where Are They Now?)

Autism Light honors diverse heroes to the world of autism.
Posted by Alan Stokes at 10:07 PM