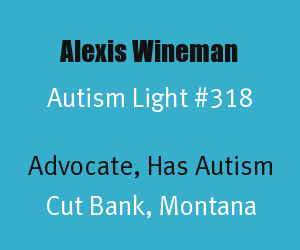 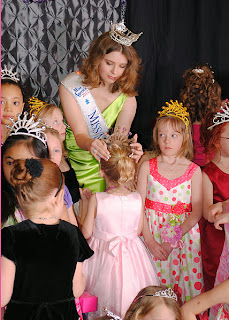 Alexis Wineman is a 19 year old with autism from Cut Bank, Montana. Alexis Wineman was Miss Montana in 2012 and was the first contestant with autism in the history of the Miss America pageant. Her platform issue at the pageant was "Normal is a Dryer Setting: Living with Autism (Huffington Post, 1/10/2013)." Alexis Wineman is an Autism Light for her autism advocacy and her groundbreaking achievement for people with autism.

Here is a news story of Alexis Wineman being named Person of the Week by ABC News.


2013 Miss America Pageant:  Alexis Wineman finished in the top 15 in the 2013 Miss America Pageant and won the coveted "America's Choice" Award by vote of viewers in the online competiton (Missoulian, 1/14/2013). In a CNN Report Alexis said, "My autism isn't what defines me. I define what is autism."
Future Autism Advocacy: Alexis Wineman shared this about her plans to continue to make a difference for autism even after her time as Miss Montana came to an end, as her successor was chosen in 2013. She said,


The glitz and the glamour may have faded from the wonderful experience of Miss America, but my commitment to raising awareness about autism and building bridges of acceptance grows stronger each day -- especially after I read e-mails, Facebook posts or tweets from the people who have supported my journey (Alexis Wineman, Via CNN.com).

Here is a video of Alexis Wineman being interviewed about autism by KRTV in Montana for their Face the State program.

Special thanks to Alexis Wineman for being an autism advocate and spreading autism awareness through her platform of having been Miss Montana and a Miss America contestent.  We look forward to hearing more about Alexis Wineman's advocacy for autism in the years ahead.

Photo: The photo in this post of Alexis Wineman is in the Public Domain and found on Wikipedia.

Email ThisBlogThis!Share to TwitterShare to FacebookShare to Pinterest
Labels: Autism, Has Autism, Montana