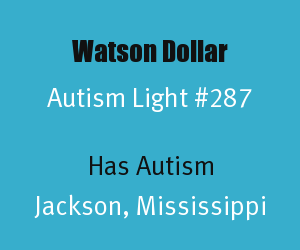 Watson Dollar is a 20 year old man with autism from Magee, Mississippi in the Jackson Metropolitan Statistical Area. After two decades of silence, Watson has amazingly started to communicate with the use of his iPad. Watson Dollar is an Autism Light for demonstrating to the world that communication can surface even later on in the life of someone with autism.

Watson Dollar's last word was uttered in 1993, when he said "Lights" before having surgery on his ears. He was diagnosed with autism on May 17, 1993. Through the years Watson remained silent although he was given speech therapy to try and help him communicate. His mother Pam Dollar said in the video included in this post, "Never give up, because that big breakthrough can come when you least expect it. Watson was 20 years old when this big breakthrough came for him. And at that point we just assumed we probably were where we were going to be."

On November 11, 2011, Watson Dollar miraculously communicated his first words in two decades through his iPad in a conversation with his mother. The words he typed was part of a discussion about not using his mother's glass because she was sick. He then typed the words, "I love you, Mom. Very much (Source)."

Emily Le Coz of The (Jackson, Mississippi) Clarion Ledger wrote a news story on Watson Dollar's communication. In the video below Emily Le Coz explains that now that Watson can communicate he has goals to develop friends, erase false stereotypes about autism, and to find a job.


When the news broke recently of Watson Dollar's breakthrough, it served as a bright light to the autism community. Watson Dollar is a living example that has given many parents of older children precious hope that they can hold on to.

Special thanks to Watson Dollar for being an Autism Light. We look forward to hearing more from Watson as his communication serves as an inspiration and window into the world of one who has autism.