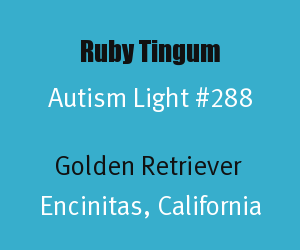 Ruby Tingum is a Golden Retriever who lives with Bruce and Caroline Tingum's family in Encinitas, California (part of San Diego County). She is an autism service dog who is very gentle around children and received her training from Tender Loving Canines Assistance Dogs, Inc. Ruby's role is to protect Garrett Tingum, a 10 year old boy with severe autism. Ruby Tingum is an Autism Light for the help she provides to the Tingum family and Garrett Tingum as he navigates through life.


In addition to autism, Garrett Tingum has mild cerebral palsy, apraxia (motor planning disorder), and pica (eats non-edible items). Garrett's most dangerous behavior is his tendency to escape his home and run into the street or go into people's homes. Ruby has been especially trained to find Garrett when he goes missing. Here is a video on Ruby's story of comforting the Tingum family.

Caroline Tingum described Ruby and Garrett's friendship in the above video, "Garrett has a friend. He's never had a real friend before. You know you don't think of children with autism as being lonely just because they can't express it. Ruby has filled that void I think."

Special thanks to Ruby and all the talented and loving dogs who are making a difference around the world for autism. If you liked this post you may like to read about other Autism Lights with the label "Animal". Ruby Tingum has also been featured on our Golden Light blog as Golden Light #8.

Autism Light honors diverse heroes to the world of autism.
Posted by Alan Stokes at 7:03 AM