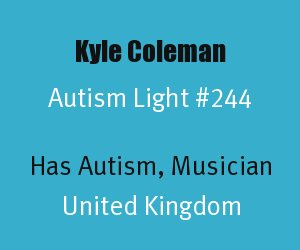 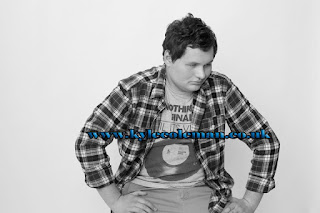 Kyle Coleman is 25 years old and from Gwithian, Cornwall in the United Kingdom. Kyle was diagnosed with autism at the age of 3 and while Kyle is noverbal, his voice comes to life when he sings. Kyle Coleman is an Autism Light for how his success in music can serve as an inspiration to others in the autism community and to foster autism awareness.

Kyle's mother said, "It became clear almost immediately that Kyle had a natural affinity with musical elements and could recreate his favourite songs on the keyboard with no prior musical knowledge. It is when he sings though that his songs come to life. His personality and emotion shine through his singing and this has made it possible for us to develop a special relationship and for Kyle's abilities and confidence to soar (Source)."

After finishing school in 2009, Kyle's mother enrolled him at the Cornwall Music Therapy Trust in Redpath and music therapist Carine Kelley has been working with Kyle since then (Source). 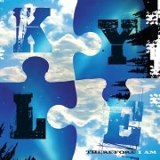 2012 Album: Kyle Coleman released his album Therefore I Am on February 20, 2012. It is available for purchase on iTunes or at Amazon. The genre of his music is Rock. The National Autistic Society (NAS) supported it. The song "Just Listen" was written by Lucy Skye and is a song about communicating with autistic people (Source).

Here is the official video of Kyle Coleman singing one of his songs about autism, called "Just Listen".


The Sun reported that "despite being unable to talk, Kyle has the remarkable vocal chords of a popstar. Kyle is the first non-verbal autism sufferer in the UK to release his own record covering songs by some of the greatest vocalists of our generation (Source)." 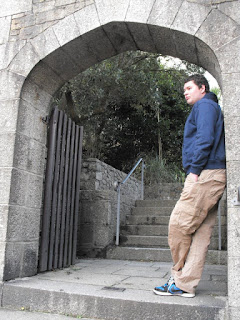 2013 Album on Autism: Kyle Coleman's Facebook page says, "Just to let everyone know that Kyle will be releasing a new album in 2013 that will portray the many facets of autism. Each track will be quite diverse and experimental in genre and will highlight Kyle's musical versatility. :) (Source)"  This is very exciting news and Autism Light looks forward to this release.

Social Media: You can follow Kyle Coleman's musical career on his official website at http://kylecoleman.co.uk/ or through this social media.

Special thanks to Kyle Coleman for singing and serving as an inspiration to the autism community. Kyle's story is a message that even nonverbal people with autism have something special to contribute to this world, and in Kyle's case it has been his music. We look forward to hearing great things about his music and autism awareness productions in the future.

The photos in this post were posted on Kyle's Facebook page are used with permission of Kyle's mother Caroline (Source).
Posted by Alan Stokes at 8:51 PM