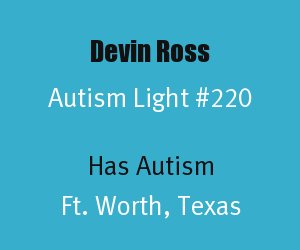 Devin Ross is from Ft. Worth, Texas, and he has autism. In 2008 he moved to Louisiana to attend Centenary College, where he majored in Psychology. Devin Ross is a talented swimmer who excels to the point that he made the Olympic Trials in 2012.  Devin Ross is an Autism Light for how he encourages other people with autism that they can achieve great things.

According to his page on the Centenary College website, he has accomplished the following:

In 2012, Devin Ross became the first swimmer in the history of Centenary College to qualify for the Olympic Trials.  He competed in the 50 yard Free Style. Devin said, "As a kid, I always dreamed of doing something great or inspiring people, I just never thought it would come through swimming (Source)."

When he was asked how having autism impacted his swimming, Devin Ross said, "I think it enhanced my swimming because I was able to put all my physical and cognitive resources into swimming (Source)."


Video Stories: More information on Devin Ross making the Olympic Trials can be viewed on videos at the following news outlets.
There are some photos on Facebook of Devin Ross at the Olympic Trials in Omaha, Nebraska. Devin placed 4th in his heat. He did not qualify for the Olympics, but he accomplished something great by advancing to the Olympic Trials and making history for his college swim program.  Devin Ross is an inspiration to all aspiring swimmers who have autism.  Devin Ross also becomes the first person on the Autism Light Sports page under the sport of Swimming.