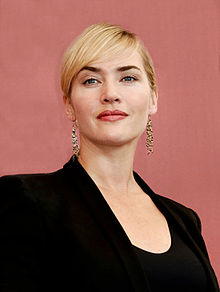 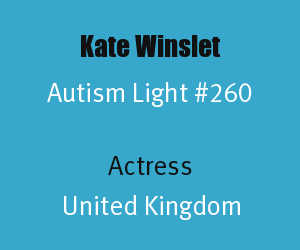 Kate Winslet is an Actress and Singer from England. Kate Winslet found her passion for autism charity work in 2009, when she was asked to narrate the English version of the Icelandic book A Mother's Courage: Talking Back to Autism (A.K.A. The Sunshine Boy), which is about a mother who raises a nonverbal autistic child, that learns to communicate with a letter board. This experience would lead Kate Winslet to form the autism charity called the Golden Hat Foundation. Kate Winslet is the mother of two children, Mia and Joe, neither one of whom have autism. Kate Winslet is an Autism Light for her creation of the Golden Hat Foundation as a charity for autism.
Acting Career: Kate Winslet earned acclaim for her roles in the movies Sense and Sensibility (1995) and Titanic (1997). She was the youngest person to receive 6 Academy Award nominations. Kate Winslet earned the Academy Award for Best Actress in The Reader in 2008.

The Golden Hat:  The Golden Hat: Talking Back to Autism was published in March, 2012. The book features photos of 100 celebrities and famous people wearing a golden hat for autism. Each celebrity is then asked to state the first thing they would say if they could talk and previously had not been able to talk (like those with autism). Celebrities featured in the book include George Clooney, Leonardo DiCaprio, Angelina Jolie, Oprah, Sting, Kobe Bryant, Julia Roberts, Meryl Strepp, Ben Stiller and dozens of other stars. You can purchase the book through The Golden Hat Foundation Store for $29.95 with all proceeds to benefit the autism foundation.
Kate Winslett is joined in writing the book by Margret Ericsdottir and her son Keli Thorsteinsson (A.K.A. Kelli Ericsdottir). Margret and Keli inspired Kate Winslet to write the book by their documentary A Mother's Courage: Talking Back to Autism. The name for the book was inspired by a poem that Keli Thorsteinsson wrote at age 12 called The Magic Hat. It goes like this.

The boy had a golden hat.
The hat was magical. It could talk.
The boy did not have any voice. He had autism.
His hat was always with him.
His hat was lost one day.
Now he had no way of telling them his stories.
His mom and dad became sad.
They taught him spelling on a letterboard.
It was hard.
end (Source).

The Golden Hat Foundation lists this as their mission on their website:

The Golden Hat Foundation is a non-profit organization dedicated to eliminating barriers for people with autism around the world, and creating an environment that holds these individuals as intellectually capable. The mission of the Golden Hat Foundation is the establishment of innovative campuses that offer people with autism the opportunity to learn to communicate, receive an education, job training and enjoy recreational activities, all within a supportive network. When given a suitable education and the means to communicate effectively, people with autism can truly realize their dreams (Source).

Visit www.goldenhatfoundation.org for more information on the Golden Hat Foundation.


Quote on Autism: Kate Winslet told Celebrity Baby Scoop in an interview that the biggest misunderstanding about children with autism are, "That they are not capable of understanding anything, that they are completely locked in their own worlds and aren't paying attention to anything around them or that they are disinterested. Even those closest to them sometimes believe that. And so often that proves not to be the case (Source)."

Other Articles: The following online materials have been written about Kate Winslet and her autism work.
Social Media: You can follow The Golden Hat Foundation and Kate Winslet at these social media areas.

You can read more information about Kate Winslet on her Wikipedia page here.

Special thanks to Kate Winslet for being an Autism Light. We look forward to hearing about the exciting growth of the Golden Hat Foundation to help the autism community and of course to future movies starring Kate Winslet.

The photo of Kate Winslet is in the Creative Commons of Wikipedia and was taken by Andrea Riffon.
Posted by Alan Stokes at 10:50 AM