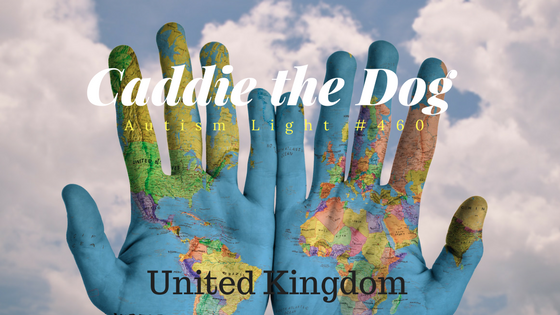 Caddie is a Labrador Retriever/Golden Retriever mix dog who lives in Newquay in Cornwall in the United Kingdom. Caddie is a therapy dog for a 13 year old boy with autism named Joel Sayer. Caddie is an Autism Light for having a positive impact in improving Joel's journey with autism. In 2017, Caddie was a finalist in the Crufts hero dog competition by Eukanuba.

The following is the YouTube video made about Joel and Caddie in the Eukanuba Friends for Life hero dog competition in 2017.

Caddie helps Joel with a variety of everyday tasks and provides an anchor for his day to day experiences that can sometimes be frightening to a teenager with autism. Joel's mother Janet said about the intervention skills of Caddie that, "When Joel can't cope, he paces around, but Caddie will nudge him, Joel will start stroking him and he'll come back into our world (As quoted by Emma Cox, RadioTimes.com, March 8, 2018)."

Dogs for Good: Through the sharing of their amazing life story Joel and Caddie are encouraging people throughout the United Kingdom to support the charity Dogs for Good. Their efforts have raised over 32,000 pounds to enable other individuals with autism to obtain a therapy dog like Caddie. Joel said, "Fundraising is great, especially when it's for someone who helped you. It's the best way of saying thank you (As quoted by Emma Cox, RadioTimes.com, March 8, 2018)."

Caddie will be added to the Autism Light Animal Page today. Caddie is a fine example of a dog who is making a difference through a therapeutic and loving relationship with a young person with autism. We wish Joel and Caddie the best in the future.

Autism Light honors diverse heroes to the world of autism.
Posted by Alan Stokes at 9:16 PM