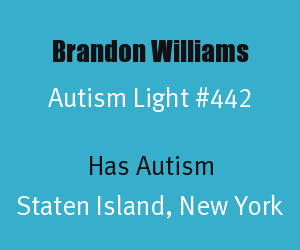 Brandon Williams is a 13 year old with autism who is in the 7th grade at Barnes Intermediate School in Staten Island, New York. On October 28, 2015, Brandon noticed a classmate, Jessica Pelligrino, choking. He successfully performed the Heimlich maneuver and saved Jessica. Brandon Williams is an Autism Light for his role in helping save a classmate when she was choking.

Brandon Williams was asked where he learned to perform the Heimlich maneuver and he shared that he learned it from watching the television show SpongeBob SquarePants. The following is a news story from the Staten Island Advance about Brandon Williams saving his classmate's life.'

Brandon's father, Anthony Williams, said, "He picks up on things that most of us would miss, and files it all away in his head, and he can recall it in an instant. That's how he knew instantly what to do. And we're glad he did. We're proud of him (The Mighty, Melissa McGlensy, 7th Grader with Autism now a Hero Thanks to SpongeBob SquarePants, November 6, 2015)." Anthony Williams was very encouraged by Brandon's heroic actions in this incident. He shared that this is what Brandon taught him about autism:


Raising special-needs kids, you feel like they're very limited in what they can do. This just proves don't ever hold your kid back for anything. There's no limits to what these kids can do.

It's something positive in the autism-spectrum community, that there's hope. Don't ever think they can't do anything as they go on in life and as they get older (New York Daily News, Staten Island Teen with Autism Performs Heimlich Maneuver on Chocking Classmate after he 'learned it on SpongeBob', November 6, 2015).

Special thanks to Brandon Williams for being an Autism Light. Brandon is representative of the many individuals with autism who are everyday heroes in their communities. We wish Brandon all the best and hope he will continue to learn and grow in his life.

Autism Light honors diverse heroes to the world of autism.
Posted by Alan Stokes at 8:31 AM