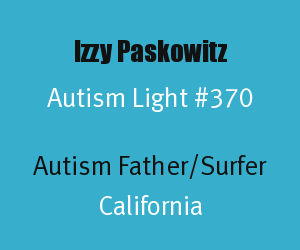 Israel "Izzy" Paskowitz is a professional surfer from San Juan Capistrano, California and an Autism Father. Izzy and his wife Danielle have a daughter named Ella and a son with autism named Isaiah. Izzy Paskowitz and his wife Danielle founded Surfers Healing, a nonprofit surf camp for children with autism over 15 years ago.  Izzy Paskowitz is named the first Autism Light of 2015 for making a difference in thousands of autism families through Surfers Healing. Izzy will also be the first representative of surfing on the Autism Light Sports Page.

Izzy was born as one of nine children in the famous "Doc" Paskowitz family, who in the early 1970's traveled around the United States in their camper and became known as the "First Family of Surfing". The Documentary Surfwise was written in 2007 about Izzy's family.

Gabriel Noble wrote, "Izzy naturally became a pro surfer. In 1983 he beat legends of the sport and soon became a world champion long-boarder. He won national and international events, including Australia's Coke Classic Championship and the Hang Ten Classic. At the height of his career he landed a Nike cover ad standing next to Bo Jackson, Michael Jordan and Andre Agassi (Gabriel Noble, Yahoo News, June 27, 2013)."

Here is a video of Izzy Paskowitz talking about his work at Surfers Healing.

In the above video Izzy Paskowitz says,


I know exactly what I'm supposed to do. I'm supposed to be here to take out children with autism surfing. I couldn't do anything else in autism. I'm not going to find the cure. I don't know to much about autism. But I know now I can take a bunch of autistic kids and we can ride waves and are not going to charge a penny for it (Izzy Paskowitz).


Izzy Paskowitz didn't think his life story would fill a book. It does more than fill it. It jumps out. Izzy pulls no punches and deals with his life honestly. While most memoirs are sold by their sensationalist revelations, Izzy acknowledges the sensational parts of his life with a shrug as if to say, "I know this sounds foreign to YOU, but it was just my life." The strength of Izzy's voice in the book leave the reader feeling as though he or she is being told the story over dinner and drinks. And it zips by much too quickly. This is not just another sob story memoir, it is an intimate look into a life that is anything but ordinary.


Through the transformative experience of surfing, Surfers Healing attains greater mainstream acceptance for both the families of and the kids living with autism. People seem to have a lot of pre-conceived ideas about what kids with autism can or can't do. We're here to change those notions forever. Surfers Healing has spent the last 15 years taking children with autism surfing. Our goal is to help foster the understanding and acceptance of autism.

Here is a video about Surfers Healing.

Social Media: You can follow Izzy Paskowitz and Surfers Healing on the following social media areas.
Special thanks to Izzy Paskowitz for his vision to help start Surfers Healing and his dedication to continue this very memorable camp for many children with autism. Izzy Paskowitz's efforts are an example of what a father can do by using their own talents and professional expertise to make a difference for autism. We wish Izzy and his family all the best. They are a treasure to the autism community.

Autism Light honors diverse heroes to the world of autism.
Posted by Alan Stokes at 10:29 PM